Life and Times of the Gold Industry Revisited | Sepor, Inc

Life and Times of the Gold Industry Revisited

In late 2013 I uploaded my first ‘Miller Time’ about the “Life and Times of the Gold Industry”. One or two of you may have read it. It’s still on the website if you’re interested. In that article I talked about the current depressed gold prices, and how it impacted the industry, miners and mining companies. At the end, I predicted ‘3 to 4 years’ before gold would become once again a popular investment vehicle. Well, we are headed into the 3rd year since I wrote that, lets see where we are.

I said then that gold was pretty stable in my opinion, around $1200. And so it has been. 2014 was closer to $1300, 2015 perhaps closer to $1100, now back to $1200. But what provided this stability? A bottoming oil price is one item. As I mentioned back then, as well as in my later article “What are those OPECkers Up To?”, gold and oil have traditionally traded at a fairly consistent ratio of 4g Au/bbl oil prior to 2008/2009 and 2g Au/bbl oil afterwards. I conjectured that the change in the ratio may have had something to do with terrorism-supporting governments switching at that time from US dollars to gold as their currency for trading in contraband oil. And what has happened to the ratio now? Lets look. 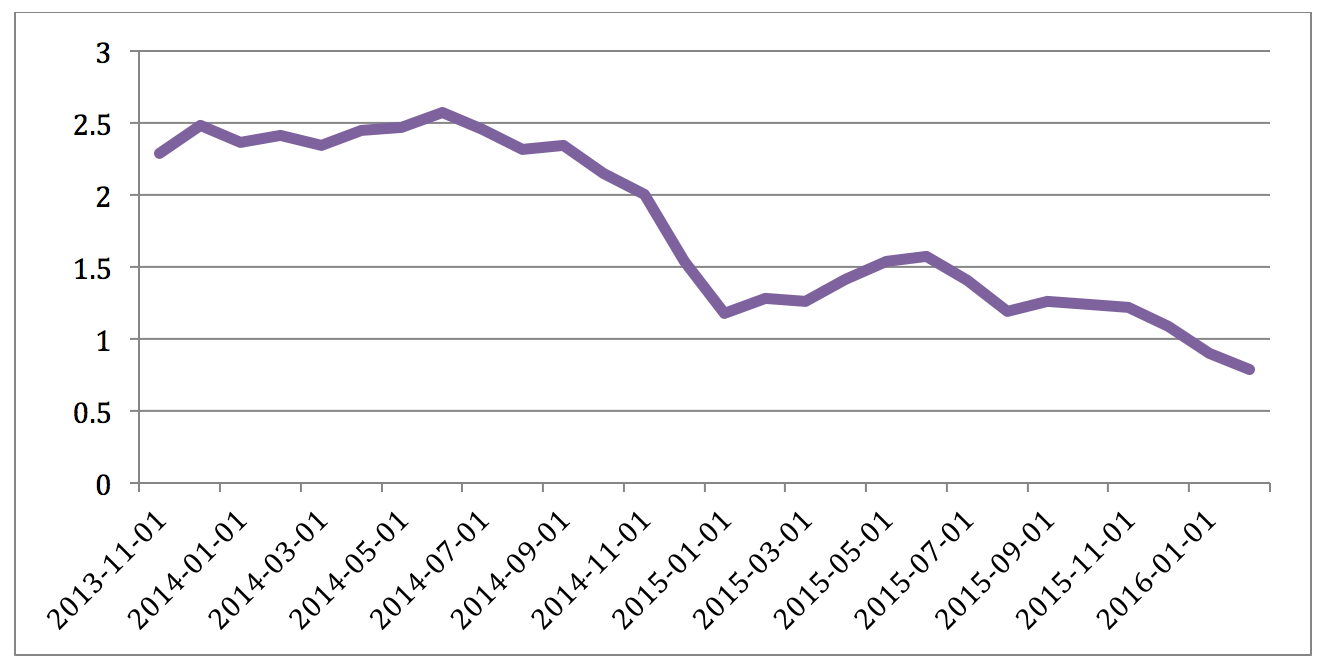 The ratio held up from late 2008 until the end of 2014, when it changed again! Now what was happening at the end of 2014? Obviously, oil prices were way down…what else? Well, the Chinese economy has been trending down, with imports in general dropping (though crude imports are still strong). Crude imports though appear to be more to top up reserves than due to increased fuel consumption, which is more complex. Chinese gasoline and natural gas consumption are still rising, but diesel consumption…an indicator of industrial activity….is way down.

What else happened around that time? The Iran Nuclear Agreement was signed. This has the potential of putting lots of oil into a market that appears to be already close to sated on a global basis. There are stories of oil tank farms in Iran being so full that the country has had to buy retired oil tankers to hold the excess and leave them anchored off shore. In general, the idea of there being an excess of oil has perhaps happened, which has finally let go of its hold on the gold/oil ratio. It takes investors and traders a while to relinquish certain relationships but I think this is one that has seen its better days. In my opinion, the gold/oil ratio can be stored in the hoola hoop closet.

Anything else? The one big hammer being held over the gold price until late 2015 was in the hands of the Fed….threatening to raise the discount rate. Every few weeks it seemed, the Fed was out there saying “Maybe we will….maybe we won’t. Come see us again in a couple of weeks.” This went on for months, even a couple of years. Finally, late last year, the Fed dropped their 0.25 % hammer, and what happened? Not a lot, really. It had already been factored in for so long that most had already covered that eventuality. (This whole situation with the Fed and controlling markets, etc is going to be the meat of another of my articles one of these days….entities normally get in lots of trouble for intentionally influencing markets in favor of one group over another….) Now that the Fed no longer is holding this hammer it has freed up the gold markets to move as they could have a year ago or more. Its like taking my Irish Setter for a walk, or letting him loose to bolt free.

So all of these things combined together to hold the gold price where it was over the past few years.

And now? I think that right on cue, late this year, we will see gold start to become a popular investment instrument again. Gold ETFs, mid tier gold producers and physical gold will return to the portfolios. Why not the large producers? Mainly, most investment portfolios kept holdings in the larger companies, reducing them last. The successful mid tier producers will be the ‘go to’ gold stocks for the portfolios. Once the share prices start to appreciate, these mid tiers will absorb the small prospectors with good projects before their share price gets too high. As this begins to increase, the investment portfolios will be pushed to start adding back some of the more speculative exploration companies to their holdings that were the first to be let go during the downturn. Stocks that have traded under $0.20 per share for the past year or more will start to move up. The companies that will see the least growth will be the large producers. The companies that have a catchphrase on acquisitions such as “We will not look at anything with less than a 5 million ounce resource” or “We only want projects that could produce over 250,000 ounces per year” and my favorite “We are optimizing our internal resources and opportunities before we look elsewhere”. Believe me, Big Gold, your people on the ground are not idiots. Though the head office is filled only with financial types, your guys on the ground have already optimized their operations over the past several years. It all boils down to doing what appears to be the ‘market smart’ move instead of the actual ‘mining smart’ one. Sure, there may be some drilling to be done at a few places that are going to bring some limited new reserves to the operations, but your going to turn around soon and all of the new projects will be taken by the mid tiers. So what happens then? Well, then the big boys start buying up the mid tiers, or the mid tiers band together to avoid the buy out frenzy, making yet another new big boy for the coming prosperity in gold that is just about to hit us square in the face.

And now what do we do as individuals? For me, if you have a few dollars hanging around that you can spare for up to 2 years, pick up some of these low cost assets. Do your DD, and chose a half dozen or so stocks trading at a nickel to a dime per share and get them in your portfolio. As long as you have at least one solid play, your going to be fine….and you may end up really well off. Heck, you might even feel so good about it that you’ll want to do a little prospecting of your own……

….and that’s where Sepor comes in! Pick up all of your prospecting and exploration needs online and have them shipped anywhere in the world. We can also custom build that small processing plant you want to try….just give us the word!