What are those OPECkers up to?

Some months ago I wrote one of my pieces on the history of the gold market, and in that article I included a paragraph about the association between oil and gold price. I didn’t understand it then, and don’t really understand it now. I understand that commodities go up together and commodities go down together, but this is a perfect opportunity to ‘uncouple’ commodities from oil. Oil prices are being artificially manipulated by OPEC in an attempt to squeeze North American oil sands and shale out of the market. The pressures on the economies that should be driving commodities up are being nullified by OPEC keeping pace with production though prices are at a 5-year low. 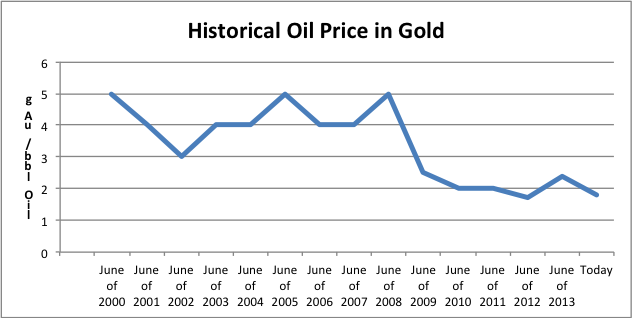 So what can we surmise from this graph? Well, prior to 2008, gold and oil seemed to be trading at a pretty steady ratio of 4 g Au per barrel of oil. Suddenly, in 2008, the ratio dropped drastically from 4 g to 2 g per barrel. There is still the relationship, but it changed its’ ratio. Hmmmm what happened in 2008? Only one of the biggest market crashes since the ’29 crash. Confidence in currencies collapsed and a new medium of trade may have been adopted by someone who a) didn’t trust dollars and Euros and b) despised the economies and populations that produced dollars and Euros.

Now why would this change the ratio between gold and oil? It means for some reason, oil became half as valuable as gold to someone in the markets. Who would that be? Who has more need of gold (or a currency) than oil?

International terror has been on the rise for years, and most of it is grown out of the Middle East. Iran, as a state, has supported terrorism for decades. Can terrorist states that produce bazillions of barrels of oil per year be using oil sales to amass gold then use it to fund terrorist groups? Certainly gold is less traceable, and generally is considered as a long-term valuable asset, probably more than dollars or Euros, as there may be difficulty in laundering dollars and Euros. Not gold. And as I mentioned, as the terrorists despise Western culture, it may be a matter of pride that they don’t need to use the currency directly.

So, according to my first theory on the decline of gold when it should be rising, and its tie to oil prices, is that International Terrorism is the main cause.

Now let’s look at it from the other side. Who has gold but needs oil? Hmmm…everyone needs oil, but who has a growing population that is becoming dependent on oil? Who is going to surpass the US probably this year in consumption and import requirements?

And who is buying up tremendous amounts of gold?

Why Are the Chinese Buying Record Quantities of Gold?

This month, the Hong Kong Census and Statistics Department reported that China imported 102,779 kilograms of gold from Hong Kong in November, an increase from October’s 86,299 kilograms.  Beijing does not release gold trade figures, so for this and other reasons the Hong Kong numbers are considered the best indication of China’s gold imports.

Analysts believe China bought as much as 490 tons of gold in 2011, double the estimated 245 tons in 2010.  “The thing that’s caught people’s minds is the massive increase in Chinese buying,” remarked Ross Norman of Sharps Pixley, a London gold brokerage, this month.

…and this from a little over a year later.

China! China has been increasing both gold purchases and oil purchases over the past several years to cover demand. It is not only a good way to get rid of the dollars and Euros they have in abundance, but is a good long term investment as well as…. perhaps a useful tool for purchasing oil from terrorist states? If there were a deal in place to purchase oil for dollars prior to 2008, then the currency markets tanked, and you switched to gold for oil, you would see just the kind of outcome that is evident in the gold market today…..oil trading at half the gold value it did prior to 2008. (The Chinese Investment Corporation holding some 300 billion dollars in foreign currencies alone allows for a pretty free and hidden hand in dealing with gold or oil purchases if necessary.) Even though the currencies bounce back, I would imagine the terrorist groups actually prefer dealing with gold, and find it much more flexible of a medium for purchase of arms, or technical expertise in waging a media war against the West. Besides the Chinese, who could provide this combination of arms and technical expertise? Well, let me give you a hint (I’m not Putin you on!). It’s the Russians! Our old ‘confreres’ the Russians and the Chinese are once again at odds with the West. Did the cold war ever really end? Or did it just switch gears?

There we are. We have just completed Miller’s 1st Theory of Why the Gold Price is Not Rising as it Should. We shall tackle another should this trend continue in my next edition.