Life & Times of the Gold Industry

Well, it’s storytelling time again, and I got a whopper for you.  An intricate tale of poverty, struggles to make good, successes and plunges into poverty again.  Settle down in your stuffed chair…or more likely skooch your desk chair a little closer to the monitor…. and read on.

What are we going to talk about?

In the early ‘70s gold was disconnected from the US dollar by the Nixon administration in a move to stabilize the dollar and avoid devaluation, as European countries were swapping their dollars for US gold.  A side effect was that gold price was no longer fixed at $35 per ounce…the value at which the US had redeemed its’ dollars prior to the ‘Nixon Shock’.   Some of the gold mining companies operating today were created at this time, with investors betting on a gold price ‘blastoff’.  Gold began to climb and in the early ‘80s, jumped to around $800 per ounce on a dizzying rise akin to the buildup of the stock market in the ‘20s (only to succumb to the market crash in 1929.)

Champagne bottles were used to launch armored cars from their berths at the gold refineries.  Technology advanced in enormous strides as the best minds were hired to make improvements to the industry, all funded by the enormous profits being realized at the time.  Of course, all good things end, or at least stop to take a breather, and like the ‘20s stock market going before it, in the mid ‘80s gold crashed.  Most gold companies were caught off guard, had high level sessions in cigar-smoke filled rooms and put a wrecking ball to many of their operations.  A lot of large resource companies that had added a ‘gold subsidiary’ relieved themselves of these units, throwing them out of upper story windows… to be caught by a few savvy gold miners not averse to the risk.

In the next couple of years, gold prices climbed back to a level where gold companies were encouraged to dust off the projects that had been put on hold or mothballed in the mid ‘80s and started pouring the capital into them once again.  Life was good; gold was trading at a healthy price, in the high $300 dollar to low $400 dollar range.  Maybe not strong enough for champagne launches from refineries, but certainly there were a lot of keggers in the mining communities.  Then again, in the latter half of the ‘90s, gold prices moved down.  Once more, decisions were made in cigar-smoke filled rooms that either put the axe to or traded the weaker operations and projects (a great opportunity for some of the bolder mining companies.  This, in fact, provided fodder for the ascendance of many of the great new-age gold giants).

Gradually, over a period of a few years, gold creeped up again, and in the early ‘00s prices reached a point where companies were willing to revive some  of their old projects, mortgage the farm and home, and put their money into getting gold mining back on its’ feet.  Around the mid ‘00s, gold started to move up strongly and projects proliferated.  Suddenly, capital costs went through the roof as materials of construction and equipment costs rocketed, but never mind….banks and investors were handing out money hand over fist to anyone who had a reasonable gold project.   Capital was considered ‘free money’.  Gold ETFs were born and the whole world had a way to invest in gold without having to stick it under their bed.

Everyone was giddy and companies started putting capital into more marginal projects and riskier jurisdictions.     Gold prices worked their way up, somewhat more rapidly now, with larger short term jumps and drops as the investors worked in and out of the market.    Gold approached $1000 per ounce, getting there in early 2008…. and predictions about where the price was going were as abundant as JFK conspiracy theories.  Gold company executives were predicting $2000 gold within a few years.  Of course they were!  What else could they tell shareholders and analysts?  By this time, most major gold companies were run by CEOs with financial backgrounds instead of operations experience.  Selling stock became the focus, and new discoveries sold stock.  Exploration had exploded in the mid ‘00s and competition for geologists and equipment was fierce.  Gold stock values soared as new projects and project updates were announced on a daily basis.  Then the economic scare of 2008 hit and there was a small panic, but recovery was fairly rapid and things smoothed over….this would not be the big drop.  Gold went back to its steady increase, climbing well over $1000, hitting $1200, then $1500 and all was well again.  Gold soared to $1900! Prevalent speculation was that gold was headed over $2000, and who knew where the limit would be?  Some analysts said they could not predict the next gold price ceiling!

That was because it was way below them.

Once again, gold had gotten well ahead of its’ stable market value, and was doomed to drop.  Lots of us knew that back in 2008, but many still wanted to get in on the gold bull market.  Gold stocks were at an all time high, companies were earning outrageous profits and projects around the world were eating up billions in investments.  Gold mining reality shows appeared on TV.  Then in 2012 the peak turned into a down slope.  Some small recoveries bolstered hope with miners, but it was on its way down, and by 2013 gold was headed to another valley.  Gold stocks took serious hits and market values plummeted, some companies losing half of their value or more.

That is where we are today.  So where do we go from here?  I personally feel that $1200 is a pretty stable ‘shelf’ for gold, with potential ups and downs of as much $200, but I doubt we will ever see gold below the high hundreds again for any extended period.  Gold and oil prices tend to follow each other, but there is a more intricate interplay of international stability and international economies at work, as they don’t lead or trail each other, so I wouldn’t say that oil is a bellwether.  I’m attaching some graphs to illustrate.  If the day ever comes though that there is an oil refinery with inventory it can’t sell, all bets are off. 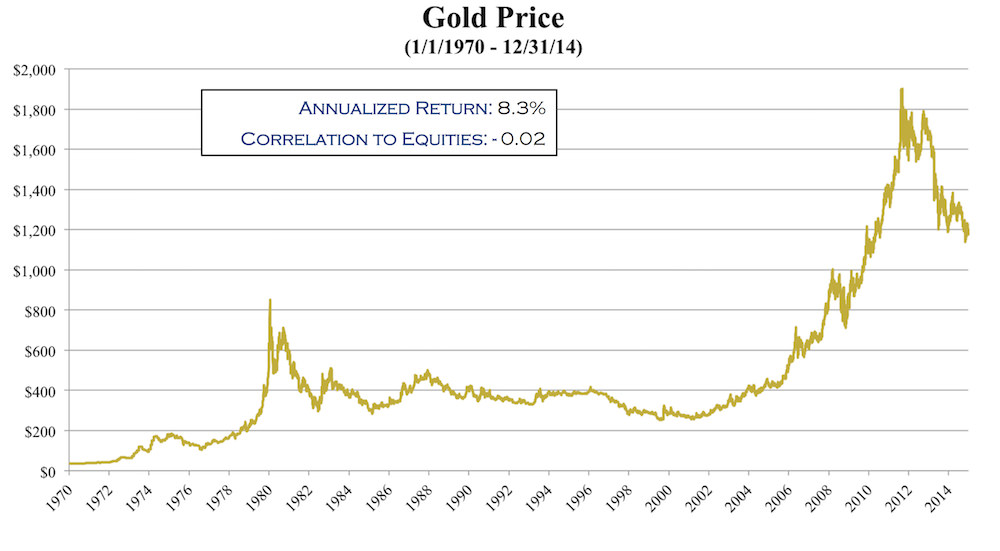 What is going to happen? Just look at history. Projects will be put on hold. Exploration will be significantly reduced. Technical staff will be let go, and will seek other industries in which to work. Probably we will see some more mergers/acquisitions coming up (nobody smokes cigars anymore, they work out in gyms, so it will be done in sweat-filled rooms.) There will be another climb over the coming few years until gold once again becomes a popular investment vehicle for ‘everyman’, not just the boldest. When will it become popular again? I am betting on perhaps 3 to 4 years, but 10 years or so after…..WATCH OUT AGAIN!

You have to love this industry, and I salute the diehard investors who stick with us in the mining industry through the lean times to reap those huge rewards for those few good years before, once again, we head back into the salt mines.

And if you want to get in on this roller coaster, now is the time to do it but…..BUCKLE UP! THE RIDE MAY BE BUMPY…. BUT IT IS ALWAYS WORTH IT!

Until next time, keep your blasting powder dry and your ore wet.